As one of the best destinations in Indonesia, Yogyakarta or Jogjakarta (simple word  only Jogja) is the center of Javanese civilization. Yogyakarta is a Sultanate city. The king of the city called Sultan. And the Sultan Palace is considered as the conservation of Javanese Culture: the language, the dance, the music, the puppet show, the way of life and the philosophy.

Yogyakarta or Jogjakarta is the center of Javanese civilization. Yogyakarta is a Sultanate city. The king of the city called Sultan. And the Sultan Palace is considered as the conservation of Javanese Culture: the language, the dance, the music, the puppet show, the way of life and the philosophy. 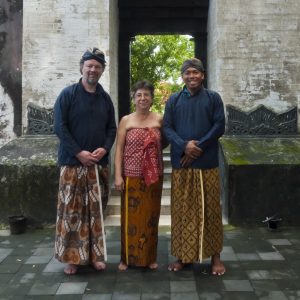 Yogyakarta derivated from 2 words, “Ayodya” or “Ayogya” and “Karta” which mean a peace and prosper. Peace and prosper represent the principal goal of Javanese life. The founder of the city, wish the population of Yogyakarta could live peacefully and prosper. 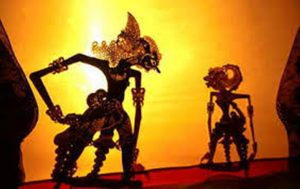 Yogyakarta is a modern monarchy city. The king is also act as the governor of Yogyakarta. That is why we call it Yogyakarta Special Region. Yogyakarta is city with 650.000 of citizen

Yogyakarta is known as student city as the first University in Indonesia (Gadjah Mada University) was established in Yogyakarta.  The establishment was started by Soekarno, the first president of Indonesia, supported by the 9th Sultan of Yogyakarta. The Sultan gives the authorization to use one of his land to build university. We could find about 40 universities in Yogyakarta.  Some people would consider this city as a village. Because the original people from this city live a slow life. Just like the what Javanese people always say “Alon-alon asal klakon” which means “Slowly but sure”. That philosophy makes the life more at ease. 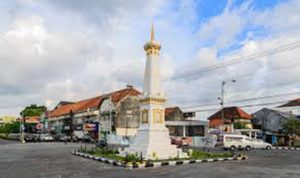 How to get to Yogyakarta

Yogyakarta is a favorite destination for local and International tourist. There are some ways to get to Yogyakarta:

Yogyakarta has 2 airports : Adi Sucipto city airport (old) and Yogyakarta International Airport  about 40km from Yogyakarta City. It takes about 1.30 minuts by Car. To visit Yogyakarta by plane, you could pass by Jakarta, Denpasar, Surabaya, Medan, Palembang, Pekanbaru, Ujungpandang,  Banjarmasin, Balikpapan, et Lombok. Domestic flight to Yogyakarta serves by Garuda Indonesia, Lion Air, Citylink, Batik, Sriwijaya, and Airasia. For you who wants to take a direct international flight to Yogyakarta, you could pass by Kuala Lumpur  Malaysia and Singapore. The new  Yogyakarta International Airport start to operate on 1 April 2020 and for the next coming will welcome international  flight from other country. We will inform you latter.

You could take train from Jakarta in executive class depart from Gambir station, Jakarta. You could also take a train from Surabaya from Gubeng station. Executive train is comfortable with air conditioner, comfortable couch, inclinable, and punctual.

You could also take bus from Pulogadung, Jakarta, or Ubung, Denpasar, and Bungur Asih, Surabaya. We recommend you to take the executive or at least business class (air conditioned)

What to bring back from Yogyakarta

Batik.
Yogyakarta and Solo is considered as the center of Traditional Batik fabrication. Batik is a method of making pattern on a cloth. One of the most ancient Batik motif is Parang Rusak created by the first king of Mataram Kingdon, Panembahan Senopati. He found the idea of making the motif after do some meditation in Parangkusumo beach and see the never ending waves. The motif of infinitive letter “SSSSS” is a symbol of a never ending efforts of life. Sultan Agung, the 3rd Sultan of the Mataram Islam Kingdom modified the motif into bigger dimension which we call it Parang Rusak Barong. The motif can only be used by Sultan or the king. That is why, a batik motif is always connected to the royal family.

Now, we can see many batik motifs use in various thing, not just for clothes. The color and the pattern is becoming more various than before. That is how we preserve the Batik in our modern life.

You could take a private course of Batik for only 2-3 hours and you could bring it as a souvenir. You could arrange the activities with your children.

Kota Gede is an ancient capital of Mataram Kingdom. Nowadays, the region is known as the center of Silver Handicraft. You will see the making of the silver handicraft in Yogyakarta. We made the color in matte color, not too shiny. In Javanese philosophy we have to live modest without showing too much of our richness. The workers in the workshop are dominated by man. They’re allowed to work from home or in the shop.

You could take private course and don’t hesitate to communicate with us, if you want to do it.

Bakpia is a traditional cookies from Yogyakarta. It’s made from green bean put is a sheet of flour and rice dough. The shape is round. Right now, we combine the cookies in different flavors: bean, cheese, durian, chocolate, etc. To visit in Yogyakarta.

When you’re in Yogyakarta, you have to visit the Sultan Palace to see the history, the way of life, the philosophy and the Javanese Culture in General. You can continue to Tamansari which is located behind the Sultan Palace. As a complex of moslem family, Sultan built an underground mosque. After the earthquake, Tamansari is used for the citizen. They built house inside the castle.  When you visit Tamansari you will pass in front of local people’s house so you can see the life of Javanese people. Javanese people consider bird as an important thing after women, house, keris, and horse, bird can show the status of the people in the society. That is why you can see a big Bird Market. From Bird Market you could continue visit the Batik and Silver Handicraft fabrication. 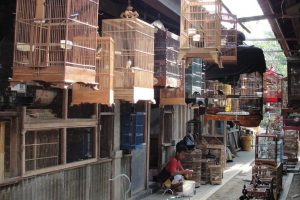 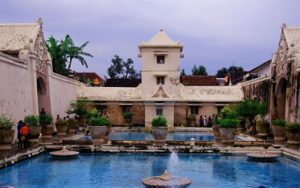 Merapi is one of the most active volcanos in Indonesia. Merapi has a regular activity as a volcano. Every 5-6 years, Merapi will erupt. The last big eruption happens in 2010, that is considered as the biggest eruption after 1874. More than 300 peoples dead (Including the guardian of the volcano, Mbah MARIJAN) and more than 2000 house destructed. After the eruption the villager must build their house at  lower zone than their actual home. But now, the local run a Jeep tour thanks to the eruption.

For you who want to walk to the volcano, you can take start from Kinahrejo, the village where the guardian of Merapi, Mbah Marijan, lived. Or you can come between May-November to climb Merapi from Selo, in the north part of  Merapi.