About 50 km east of Bali, Lombok is a small paradise on earth. A pepper like sand can be found in the south of the Island, in Kuta. The Gili isles: Gili Trawangan, Air, Meno are the best place to escape from touristic place like Bali. Senggigi is a seaside station in the east of the island to discover the nature and culture of Lombok.

The provincial capital and largest city on the island is Mataram. It is somewhat similar in size and density with neighboring Bali and shares some cultural heritage, but is administratively part of Nusa Tenggara Barat along with sparsely populated Sumbawa. It is surrounded by a number of smaller islands locally called Gili.

Lombok is a very beautiful island with the area of 5.400 km2 almost the same as Bali. With the population of 3 millions, the majority of the people is moslem and 15% Hindu which came from the ancient kingdom of Karang asem, Bali. The island is dominated by Rinjani Volcano, with 3726 m high, the volcano has the second summit of Indonesia after Puncak Jaya, Papua.The land is so fertile, just like many part of Indonesia. You can find the plantation of coffee, Tabaco, and corn. 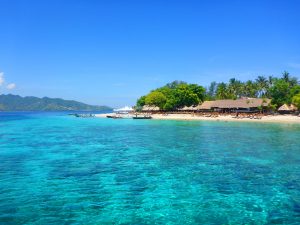 How to get to Lombok

If you come from Denpasar, you could take the flight direct to Mataram for 45 minutes. If you want to visit Kuta, Lombok, we suggest you to take the flight. Lombok is a domestic and international airport that connects Jakarta, Surabaya, Makasar, Singapore and Kuala Lumpur. The Lombok International Airport is designe to reduce the traffic in Ngurah Rai Internatonal Airport, Bali. Lombok also designated for Australian surfer tourist.

Sasak is the oldest kingdom of Lombok and considered as the origine of people and culture of Lombok.  As Lombok is close to Bali, the Karang asem King, in the east of Bali came to dominate the island for certain period. They’re connected to the culture of Bali in term of language but the majority of Sasak people are moslems. Even though they’re moslem, they have different style of practicing the religion. They only do the prayer 3 times a day. We call it Islam Wetu Telu (Three Time Islam). They live in the north of Lombok near Senaru.

Rinjani is the second summit of Indonesia after Puncak Jaya in West Papua. Rinjani is the favorite for the young people because it is one of the most beautiful volcano in Indonesia. Rinjani has a big caldera and a volcanic lake with turquoise color, with the size of 1.100 hectares and 230 m deep. Beside the lake, you will find a new volcano of 2376 m. The new Rinjani erupted for the first time at 1944 and comeback with another eruption in 1966, 1974, and the last eruption in 2015.

You could trek on Rinjai for 3 days. If you want to reach the summit with less far rute, you could take the rute from Sembalun with 2 days’ trek. But if you want to do some more sportive activity and stay longer by the nature, you could start from Senaru and stay for 2 nights in the tent and enjoy the beautiful panorama with hot spring near the volcanic lake.

The NATURE OF LOMBOK

You could also do some activities like, visit the traditional village of Sasak, beautiful rice field in Tetebatu, beautiful waterfall of Sendanggila, white sand beaches in Kuta and Tanjung Belanak in the south of Lombok.

The majority of Tourist who visit Lombok won’t miss the stay at the Gilis. If you like to do some fun activity like Party, you could stay in Gili Trawangan. If you prefer a calmer stay, you can stay at Gili Meno and Air. You could soak up in the beach in front of the hotel or diving around the island with a chance of meeting the sea turtle. You could also cruise from Gili-Flores-Komodo. The cruise is divers from the standard cruise to luxury cruise.